This event is very memorable for many reasons that we believe are worth mentioning and you should definitely know such as the fact that PyeongChang is the first “village” in the world equipped with 5G technology, the ability to gather 2900 athletes and have 94 countries participating which is a new record for the Winter Olympic Games since the Sochi 2014 Olympics and let’s not forget that this year at the event there will be launched 6 new sports categories: Snowboard Big Air, Curling Mixed Doubles, Speed Skating Mass Start e Esqui Alpino Nation Team Event.

The Olympic Comite challenged us to be a part of this event and manufacture the costumes that the Portuguese team will wear during this period. 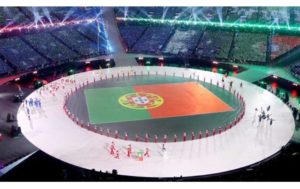 Our company committed itself to thrive and show the capabilities that make SCOOP one of the most capable companies of the Textiles Industry in Portugal, that is clearly seen in the garments made with high technical quality.

All the pieces were thought about carefully with the intent to implement the planisphere created by  Alberto Cutileiro along with the Office of the Navy Museum in May 1970 and represents the most important sea routes made by the Portuguese, with the marked tracks, the split line established by the signed Pact of Tordesilhas and also contains elements of flora and fauna, amongst others, that were known to be consequences of the discoveries all designed with use of the ancient cartography made in the XV-XV century. 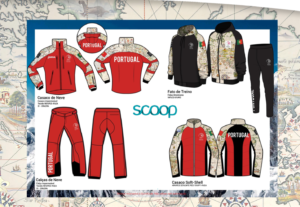 The piece were applauded and the results couldn’t have been any better, now we wish good luck to all the Portuguese Comite Team and our fierce athletes. 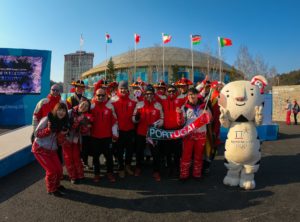