SCOOP example of women leadership in the Textile Industry

“How they already rule textiles” is the title of the press interview written by Exame Magazine where Mafalda Pinto (Scoop’s CEO) appears and speaks about her journey has a textiles business woman.

Since her beginning as a translator for Silvercorte (textiles company that belonged to her husband family), Mafalda was immediately conquered by this industry and as soon as an opportunity appeared and even with full knowledge that it wasn’t going to be easy to show her worth in a position by then held by men she had no hesitation in that decisive moment.

She believed in a partnership side by side with a Swedish couple that were looking for opportunities for their own clothing line but lacked support to control production and manage the orders in Portugal. So, Mafalda understood that it was time to begin her journey through the Textiles world having as a partner her husband Virgilio, by that time they opened their company in 1991 called SCORECODE where SCOOP takes place.

SCOOP has been a target of huge projects, challenges and moments to be proud. Since the production of the uniforms for Expo ’98, the production of the uniforms for athletes of the Russian team in the Olympic Games last year, making a special edition clothing line for the celebration of the 50º Anniversary of the NFL Games and of course the visit of our President, Cavaco Silva this was the best way to give recognition to the work done by the company and the President said with kind words “I understand this works well because this is ruled by women”.

In the magazine, we can read even more about the big accomplishments in which Scoop is involved and of course the inspiring journey of this business woman Mafalda Pinto. 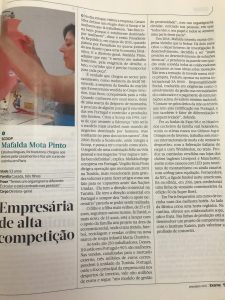